Well, Happy New Year! I hope everybody had a a good time. About a week before Christmas, ablaze with festive idiocy, I determined to make another Christmas pudding. When I say ‘another’ I mean a) I didn’t do one last year and b) this was attempt 2 for 2019. The first effort tasted rather good but it had a slightly … moussey texture and I confidently predicted that, after its Christmas boil up, it would look like Vesuvius The Day After the Event.

I had only myself to blame for this, of course; I took a Nigella recipe and then fiddled with it. I was fretting because our traditional recipe for Christmas pudding was missing in my office * Hence the compulsion to mess around with a no doubt reliable recipe.

You may well be thinking that it was too late to make a Christmas pudding; traditionalists have, of course been known to make theirs years in advance and I am sure it is true that the stuff will keep for geological periods of time with all that spice, booze, sugar and fat. My suspicion, for what it is worth, however, is that people tended to look on the spices as a preservative rather than a desirable taste in itself. Traditional British cooking (which I love) isn’t exactly famous for its spicy complex flavours: ergo people kept the puddings until the spiciness had worn off. If you like your pudding with a bit of punch then I reckon you can make it fairly last minute.

I adore Christmas pudding (so resolutely unfashionable!) this isn’t to say that I haven’t eaten some awful ones and done some rather odd things to our own. Schools, in my day, and a certain kind of pub seem to specialise in pudding that I strongly suspect of being an indifferent fruit cake with added suet (and no booze) stuffed into the mixture. (The presence of glacé cherries is usually a warning sign.)

The Christmas pudding recipe which I inherited from my mother came from an old lady in the village, Mrs B: quite simply, the best cook I have ever encountered. I felt a little comforted in my total failure to produce even an acceptable carbon copy of her chocolate log cake, or her mince pies (the pastry!) when I read Clarissa Dixon-Wright’s characteristically brusque and sensible advice. ‘True pastry cooks are born, not made; they have ice water in their fingers.’ Mrs B was certainly such a one. She was nearly 100 when she died but she had, God bless her, given my mother her recipe for Christmas pudding. This recipe apparently came from one of Queen Victoria’s cooks at Osborne House. I can’t verify this but it’s a good story and a good pudding. My mother took one look at the recipe and quadrupled the spice content. For flavour I don’t know a better one. Here is the recipe as my mother typed it just before she died. 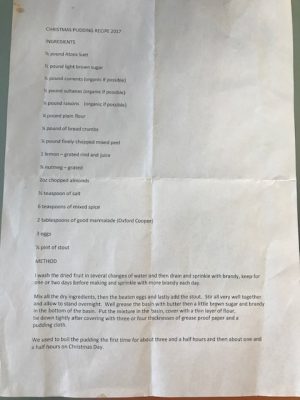 There is, however, a certain doubtfulness about the cooking times. I remember the Christmas when we turned out the pudding: ta da!

There were five of us in the kitchen and about ten expectant guests in the dining room. We all stared at the current-studded road accident, glanced  at each other and ten hands, shoved and splatted the pudding back into shape in exactly the same way that you mould a slightly sloppy sandcastle, shoving holly in the top instead of a flag. Hastily we covered it with brandy and set fire to it. The rest of the guests were, I think, none the wiser.

Then there was the year when the exact opposite happened. I blame the weather because not only the pudding but the port wine jelly remained mutinously in their respective basins and would not come out. It says much for the general sense of panic in the kitchen that the cool heads that prevailed were those of my cousins (three teenage boys at the time) who set work with hot cloths and common sense and finally winkled the recalcitrant puddings out of their shells.

Then there was the year that a slightly -more-than teenage boy, aided and abetted by mother, set not only the pudding but the kitchen and the sink on fire with flaming brandy. We had Christmas in the kitchen that year so everyone got to enjoy this.

‘Don’t panic!’ The man on question actually did say this, as flaming liquid spread rapidly across and down the Aga. He flew to the rescue: armed with a tea towel which obeyed the laws of festive physics and began to blaze merrily. He stared downwards.

‘OK, panic!’ He fled to the sink, hands full of flaming towel and then there was the business of beating out the flames and and turning on the taps. The rest of us didn’t like to interfere; they were obviously having so much fun.

Any idiot can accomplish stage one of a Christmas pudding. Put ingredients in bowl. Mix. But I confess that this particular idiot cannot steam puddings. Don’t know what I am doing wrong but I am doing it. I confess that I went for the plastic pudding basin with a lid this year. I cannot tie pudding cloths either. I have always felt there was something uncomfortably obstetrical about the manoeuvre — all scissors string, muslin and boiling water and people shouting things like, ‘don’t cut there!’ and ‘catch it!’.

Anyway, I don’t know where the pudding cloths are. That would involve going into the airing cupboard, where all my mother’s linen still lurks and at the moment I am pursuing a perfectly feasible policy of ignoring it and hoping it all crumbles to dust.

I remember some terrible drama about these cloths while my mother was in the latter stages of terminal cancer and, bless her, determined to organise a Christmas pudding. General sleeplessness and horror have fogged over the memory of exactly what drama one can have about a pudding cloth but I know there was one. It probably wasn’t the same one as my great aunt had in India in about 1910. She wanted to go into the kitchen to speak to Cook and was told that she couldn’t because Cook wasn’t decent.

What? (no doubt the Edwardian bosom swelled).

Well, because he was boiling the pudding in his loin cloth.

It was lovely Emma North of the aptly named Too Stressed To Cook catering company who rode to the rescue with the lost pudding recipe, and not for the first time. During my mother’s final illness, Emma provided exactly the kind of delicate soups, mouses and consommés that will keep an invalid eating and therefore, in the most fundamental way, kept her going for another couple of months. She also made the Christmas pudding which, although my mother would never taste it, became very important to her in her search for the perfect Christmas. When we met the other day, Emma happened to mention this recipe and I shamefacedly asked her to bail me out of the chaos into which I had, once again, dropped myself. She did and the copy shown here was sent by Emma and I am enormously grateful.

And so I made up pudding number 2, according to the old recipe. (‘I just typed ‘memory’ instead of ‘recipe’: how’s that for a Freudian slip?). As I grated the nutmeg, the smell hit me and whirled me back to all the best bits of Christmas from my childhood. Daphne du Maurier’s nameless heroine once longed to be able to bottle memory ‘like a scent’ so that you could, when you wanted, uncork it ‘and live the memory all over again’. You may not be able to bottle a memory but I know that you can mix it up and boil it. Because, there it was, the Ghost of Christmases past: the one where aunt P got the giant orange moustache in a cracker and wore it faithfully for the rest of the party, the one where my cousin’s boyfriend turned out to be a wonderful singer and sang comic songs that left us convulsed with laughter, the one where, I (aged about three) got up on the table and was found cross-legged eating the christmas pudding with a serving spoon … Our babies’ first Christmases and several people’s last Christmases. Past, present and future: it was all in the pudding, and (especially since I was a little liberal with the brandy that is supposed to be splashed into the basin before you cook it) about 90% proof.

So, come Christmas, I hauled out the puddings and began to steam them. After I had wrestled with the goose, I gave the puddings an experimental prod; they were rock-hard. Cursing, and slightly under the influence, I decided on drastic action. I hauled the puddings out of the water and turned them both out into a massive roasting tin. As I took the lid off pudding one, something slipped and I whirled the pudding into a fairly spectacular 360 degree spin. It was one of those moments of idiocy that look as if you’ve been practicing for months. (Christmas pudding spinning must be a thing somewhere in the world, surely?) To my amazement, the mousse texture held and I upended it into the roasting pan. Insouciant by now, I constructed a foil tent over the puddings, poured in some water and (more) brandy. I Tucked them up their alcoholic water bath and slammed them in the oven for about 45 minutes.

Would you believe it, this worked! I am just sensible enough to know it will never work again. I rather wish I had written down what I did to Nigella’s pudding (I know it involved marmalade and stout) and the water bath trick would never have worked if I had been stone-cold sober but, once in a while, fortune favours the foolish — and the frantic. Also the puddings gave a nice  boost to family relations since my in-laws at no point implied that they were watching the antics of a lunatic, which was jolly nice of them in the circumstances.

*As in ‘believed dead’: there are too many similarities between the fields of the Somme and my office floor.