Well, in the words of enthusiastic amateurs everywhere, I think I know what I did wrong that time. As another gardening season draws to a close, (yes, I know it ‘drew’ some time ago but I thought if I put it like that, you wouldn’t notice the, er, length of time since a post last appeared on this blog*) the battle to make three jungly acres into the epitome of an English Country Garden continues. P, who does a bit of gardening for us, says that he reckons it will take five years to get this garden back in hand. Coo.

Last year, we had no option but to largely let it all go. We kept the lawns mowed, (most) hedges clipped and abandoned the flower beds to nature and during the summer (as we battled with the aga, the water system, chimneys and my mother’s filing system, haha) the garden predictably got the bit between its teeth and bolted.

The results are one reason why I am not a fan of rewilding: flowerbeds full of dank, leggy vegetation, all twisting round each other in search of sunlight, and reminding me horribly of the opening descriptions of Manderley’s ‘lost garden’ full of ‘a host of nameless shrubs’. In the early summer it looked quite romantic; by late summer, it looked dank and unloved.

Not for the first time in the process of making this house into a house that works for us, I felt desperately stuck. The sprawling out-of-control garden, so eloquent of opportunity unused, seemed to tether me to the worst parts of the recent past. 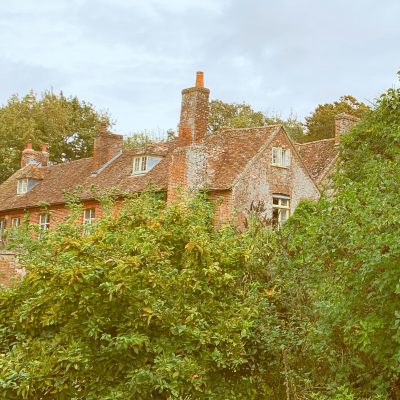 When we actually had time to considered the garden, we decided there was only one thing to do: clear the beds and start again. We employed the services of one I shall refer to as the Angel of Death because should you require a nice clean start — a horticultural scorched earth policy — he and his chainsaw will provide it with cheerful and effective good humour. The biblical metaphor holds up rather well, actually, because of the greenhouse. We knew we needed to do something about this edifice — a surprisingly charmless modern number which was shedding panes at a great rate and seriously lowering the tone of that part of the garden — but we couldn’t quite face it. The only thing that flourished in there was an enormous rosemary bush that, in good Darwinian fashion, beat out the competition and jammed the door shut. Anyway, while we dithered, the greenhouse took pity on us and sort of collapsed.

So the Angel of Death and his friend set to work with joyful efficiency and a blowtorch. I went out (a twin in each hand) to find the air full of bonfire smoke and flying sparks from metal being cut and industrial rubbish skip number 10** filling up with panes (shards) of glass and twisted metal. I stood well back, which is why I failed to notice one or two important points, and began chatting with the Angel.

I requested clemency for the rosemary bush; after all, you had to respect it for its triffid-like determination. He pointed out that this might be difficult because it was on fire, due to the sparks from the metal cutting.

I pointed out that I had asked him to take down the greenhouse, not to recreate the miracle of the burning bush.

He said that he hadn’t looked at it quite like that.

When I ventured back (twin free) an hour or two later, the greenhouse and the Angels were gone. The bush was no longer burning but it lay: collapsed, badly singed and somehow very pathetic. Ah well.

It hasn’t all been bad news. I have discovered the delights of

https://www.sarahraven.com  (almost as dangerous as Amazon to the credit card). Her Sunset Apricot wallflowers did very nicely in the south-facing bed this summer and a new lot (which arrived flourishing and healthy) are bedded in for the winter. I have planted some gorgeous La Belle Époque tulips with her too and I have high hopes of this combination (always assuming I haven’t killed them with my efforts to bed them in).

You may gather from this that I favour coffee-tinged, browny shades of pink. It is fashionable (which is slightly unnerving; the cutting edge of fashion is not really my territory) but at least it has the advantage of there being lots of plants around in those shades. My gardening life is not made easier by loathing nearly every other shade of pink: sugar pink, varicose-vein pink, screaming fuchsia: they’re all out as far as I am concerned. None of this, I hasten to add, is due to some ghastly notion of Good Taste, indeed, Good Taste would probably dictate a mix of pink, blue and white, which, (I now realise, as I struggle to establish colour schemes in the garden) is very easy to get attractively right but just isn’t me.

We are currently tackling a large south-facing flowerbed (known romantically as the office bed because the farm office is the other side of the mellow brick wall).  The angel’s attentions had rendered it bare earth and not much else at the beginning of the season. My plan is for a mix of corals and dusty pinks with soft blues and pale yellows. My little Jude the Obscure rose, with its tightly furled apricot blooms, responded at first timorously and then with increasing confidence to its place in the limelight at the centre of the bed. I think I shall get a couple more to plant in a V shape. The Café au Lait dahlias established themselves with triffid-like enthusiasm; I hadn’t realised that dahlias grew that big and this is why I planted them at the front of the bed. They’ll be sent to the back next season but I am utterly won over by the colour.

My search for blues and soft yellows has been more mixed, we planted lavender next to the Jude but it doesn’t seem to know what it’s doing there, so we’ll move it elsewhere. Husband has developed a great fondness for catmint and has planted it against the courtyard wall and by the office steps, where it has established magnificently. The blue geraniums seem to be establishing nicely too but the Alchemilla Mollis  is definitely sulking. I meant to try some pale blue phlox for autumn planting but now I think I will have to wait for the spring.

A sunflower managed to establish itself half way up the courtyard wall, where it grew at a 90 degree angle. It looked so purely Alice in Wonderland that we developed a sort of crazy affection for it and couldn’t pull it down.

I still have a terrifying number of bulbs to get in, particularly Queen of the Night tulips — that really dark purple which I love — and are supposed to reinforce the ranks at the front of the house. I am going to try Sapporo and Spring Green too.

In 2018 I killed more bulbs than I care to admit by the simple expedient of not planting them. I Read Books on the subject and agonised about how many inches down and how much gravel and when the frost would come, the precise alignment of the stars etc, etc. Finally Husband lost his considerable patience and pointed out that they might die under my nervous ministrations but they certainly would die if they sat on a table in the courtyard any longer. There’s no arguing with logic like that, so I planted, vaguely made sure the bulbs were pointy end up and left them to it. The (slender) majority actually came through. Here’s hoping it works this year. If you’re reading this from Southern England you’ll know that the reason I haven’t planted them them all yet this year is the high possibility of both bulbs and I being drowned in the rain if we ventured outside; well, there’s always next week — another well-worn maxim of the amateur gardener. 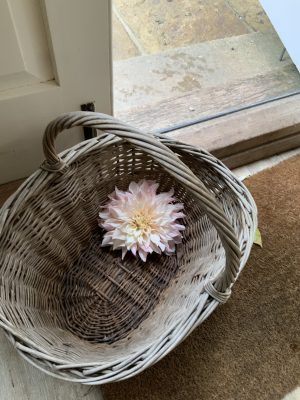 *I do realise that you weren’t banging your head against The screen \, wailing “why does she not post? Whyyyy?” but still, it is very nice of you to subscribe to this blog and I do apologise for not to have written anything here for a while.