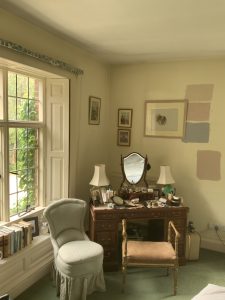 I can produce all sorts of excellent literary reasons as to why I love Daphne du Maurier’s 1937 novel Rebecca: that extraordinary tale of a gauche, very young, second wife having to take on not only the running of a famously beautiful Cornish country house but the uncannily vital memory of her predecessor, Rebecca. I first read it when I was eleven and surely one of the great pleasures of reading adult novels early on and then rereading them is the way that they display different facets in different phases of your life. The underlying plot of how Rebecca has taken on the ancestral home of her husband’s family (Manderley no less) and made it hers, and the apparent impossibility of her successor (or her husband) wresting it back, is the aspect of the novel that most fascinates me now. It will be one of the major themes that I hope to discuss at the next literary lunch on June 7th, ‘Houses and Heroines: the Chatelaines of the Country House’.

Books, not least Rebecca, have long framed my attitude to houses. They have certainly heightened my awareness of how a room can reflect it’s owner. In theory, I long to have rooms that reflect my own personality through the subtle interplay of colour, style and possessions but at present (she writes optimistically) rooms here at Pittleworth are covered in papers and possessions, piled high with books; they reflect all too accurately the clash of ideas, chaos and sentiment whirling round in my head with regard to renovating the house.

I have spent much of the last two years in a haze of what I have decided to christen Rebecca Syndrome. After my mother died in late 2017, Pittleworth, the house I grew up in and shared ownership of as an adult, became mine outright. But, whatever the legal paperwork said, the house did not feel like mine and, while I’ve secured some beachheads, the battle is ongoing.

Pittleworth as it is today is the result of an absolute coup de foudre between my mother and this house. Some houses just fit some people and Pittleworth fit her. Yes, it was messy and rundown in her last years but it was still beautiful. A few weeks after her funeral, we had a couple to dinner who had only known my mother for the last couple of years of her life. As we walked in to the drawing room, one guest stopped in her tracks and looked round. ‘Oh yes’, she said almost reverently. ‘This is Jane’s room’. She was absolutely right. There is a particular shade of Eau de nil that my mother loved. She laughingly described her style as ‘greenery-yallery’. All taste is subjective of course but my God hers was distinctive. (A friend at my wedding was able to recognise my mother from the back of Romsey Abbey simply due to the colour of her hat.)

My mother was a woman of strong likes and dislikes when it came to the vexed issue of ‘taste’ and she was capable of giving the ‘wrong’ paint colour a look that could make it blister and bubble off the wall with shame. She maintained that, in dealing with old houses, paint colours should have ‘a thimbleful of mud’ in every pot. She disliked what she referred to as ‘sickly Neapolitan ice cream colours’ but she was also wary of dark colours in interior design. Fair enough, chacun son goût and all that, but the problem is I can hear her voice, with it’s scalpel-through-silk modulation of disapproval, with every decorating choice I make because this still feels like her house. Would she have adored the Edward Bulmer ‘lilac’ pink in which her old bedroom is currently being painted? Or would it have been denounced as a ‘Neapolitan ice cream colour’? I doubt that the blue in her office would have passed muster; she distrusted pale blues in interior design, ‘too cold’. Just before she was diagnosed, I got new curtains made for the sitting room in a deep green-blue to echo the colour behind her father’s portrait. She never said anything, so I think we can assume the worst.

Last year I had a horrible sense of being trapped. The sheer volume of stuff to sort out (nine industrial skips and still much to do) followed by the necessity of some heavy duty work to the chimney and water pipes meant that we couldn’t do much to actually change the house. Hot water and safety were obviously more important than paint colours and curtains but there was a personal cost; I felt stuck in an unholy combination of a mausoleum and a rubbish tip.

Does it matter what my mother might have thought? Well, I suppose it’s a vicious circle; while the house feels like hers, it is  painful to change anything and until we change anything, it won’t stop being painful. So like grief. When it feels like my house, Husband’s house, the home we are creating together for our children, then my mother’s opinion won’t matter, though I hope there will always be a subtle echo of her love for this place. But I have to dismantle many of the things she loved, in order to get to that point.

Inevitably, after her death, I ‘tidied up’ and my things got rather mixed up with ‘her’ things. And, with use, the edge came off that sense that I am using her things, going through her drawers. They are starting to be my things.
I began using her dressing table as mine, a few of my things have found their way on to it. When I run out of tissues or hairpins, there are usually a few in the drawer. It’s the next best thing to dashing in to her room — late before a party — and asking, have you got any hairspray/tights/an evening bag I could borrow?

I would have said that it felt like a space in the house where I was in comfortable accord with her memory but is was also the place where I sat to have my hair done for her funeral. It’s the room she died in.

And then we decided to paint the room, or rather, husband gently encouraged me to get it painted and in order to do that, everything had to come out of the room.
“Everything?” I said wildly. “Can’t we at least leave the dressing table?” I knew that once I dismantled the dressing table, there was no going back, even if I solemnly tried to recreate it later, it wouldn’t be ‘hers’ anymore, so what would be the point?

It was a wrench, packing away those things: that positively Victorian clutter. There were photographs, mainly of me, scent bottles, the solid little black box with ‘gold’ trimmings in whihc she kept her hairpins and which I have associated with her since toddlerhood. There were all the little knickknacks, including the heart-shaped china box I bought for her out of my pocket money when I was about ten. It was painted with ivy leaves and I reckoned it was rather sophisticated. There was her set of silver hairbrushes engraved with her initials, FJF. In fact my mother generally used a solid black Mason Pearson hairbrush (a bit Lady Montdore?) but those brushes always make me think of Rebecca

And, yet again, Husband was right. The room, halfway through being painted in good old ‘Lilac’, feels almost ridiculously different and I am not going to put the curtains back up, I’m going to see how it feels with just the old wooden shutters. There’s rebellion for you.

I have to ask myself what I want to keep and what to get rid of. ‘It’s always been there’ and ‘it was my mother’s’ are not good enough. It’s a strange feeling: looking at the very objects that have always been synonymous with the solidity and comfort of home and having to strip all that emotional coating away and ask myself ‘do I like it? If I walked past a shop and saw it myself, just sitting in a shop window, would I buy it?’ I have in fact to make like Rebecca, sorting through the Manderley treasures, ‘this I will have and this and this’. I have to look brutally at objects and say ‘how do they relate to me and my family’s life now?’ unless I want to spend my life being my mother’s daughter and, much as I loved her, I have too many other things to do and to be.

Occasionally, if I am feeling nostalgic, I can always take her favourite bottle of scent and squirt into the air (I don’t actually like wearing it, I’ve always found the smell too strong). Rebecca fans will think I made this up but it really is Je Reviens.