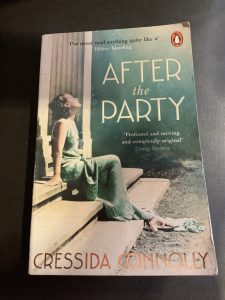 The Spectator’s review of After the Party is entitled ‘Shades of the Mitfords’ and it is almost impossible to read this novel without thinking of the Mitford sisters, particularly Unity, Hitler’s hideously-impassioned acolyte, and Diana, married to Oswald Mosley leader of the British Union of Fascists. However, After the Party is a long way from Nancy Mitford’s mockery of British fascism in Wigs on the Green or P. G. Wodehouse’s ‘black shorts’. There is little ‘funniness’ (a word much used by the Mitfords) in Cressida Connolly’s quietly impressive exploration of the women who joined British Union in the 1930s:  who became —less politely— British fascists. Their fate is followed through the lives of three sisters: Patricia, Phyllis and Nina but particularly Phyllis. Connolly has pulled off the tricky feat of focalising a novel full of nuanced ideas through the gaze of someone not particularly clever or morally admirable. The narrative is interspersed with ‘interviews’ with Phyllis, apparently from 1979. Phyllis is often under-estimated by other characters in the novel but her observations can be lacerating.

During the early part of the novel, I missed the lightness, the comedy, of Mitford or Wodehouse and I realised just how bleak and stodgily formal the 1930s can look without humour. Laughter is a double-edged sword; it can show us things, it can make the unbearable bearable and put life back into perspective but what happens when some things are too big to be put into ‘perspective’?

The novel’s title evokes both the aftermath of a very grand party and the consequences of belonging to the British Union. (Mosley dropped both ‘fascist’ and ‘national socialist’ from the name in 1936.) Charting the subtle interplay between party and party is where Connolly suggests a few answers to the question: how could anyone have joined the fascists? We watch people influenced by their social group, responding to the bossy ones, the seductive ones, the repellant ones. We can see that it is in social groupings that political parties gain their power and their unwritten moral codes, because that is where the subtle parameters of what is ‘not done’ within a group, are formed. We realise the importance of a ‘good party’.

Nor are these social gatherings simply upper-class affairs. The realisation that the lovely seaside camp that Nina, youngest and ostensibly bossiest of the trio, is helping to run is, in fact, a fascist indoctrination program is all the more chilling for emerging from a welter of domestic information about how many sausages it will take to feed all these trippers for breakfast, how difficult the other people on the committee are, etc. Nina is the kind of woman one would dread on a committee and there is far greater reason to dread her.

To be ‘amusing’ was a talent verging on a quality for the British upper classes between the wars. Was it simply that the way they had evolved to deal with the horror of one war proved, cruelly, to be fantastically poor training for the next? During the First World War, Cynthia Wyndham wrote, ‘Oh why was I born at this time? Before one is thirty to know more dead than living people’. We can appreciate the anaesthetic qualities of a good laugh for the generation that came to maturity between the wars but Connolly shows us that it could bare ugly fruit. Pranks and jokes quickly turn horrific in this book. There’s a story about a pig that ought to make members of the Bullingdon Club flinch, then there’s the apparent good nature with which the adults running a holiday camp treat a bunch of teenagers scrawling graffiti on a local theatre wall. “Put it down to youthful high spirits”.

These are the sharp moments that remind us where fascism leads but, mostly, the details of the plot are a subtle reminder that, for real people, the huge political questions of the day form only a tiny, glancing part of their lives: having to be squeezed in between collecting the children from school, building a house, ordering a new dress, getting a new job. It’s easy to disregard the unpleasant, easy to be morally lazy.

It is no surprise that this book ends up in Holloway Prison and the Isle of Man (where members of the British Union and enemy aliens were detained after the outbreak of the Second World War). Connolly has the disadvantage of all historical novelists in writing about events that we know will happen but the rounding up of BUF members is written in such an understated way that one goes some way to sharing the shock and disorientation of the women who ended up in Holloway Prison. Connolly’s descriptions of prison and prison life are brilliant, pregnant with menace. ‘Something worse than dust — an almost oily dark film, a sort of sweated acrid soot — lay over everything.’ It is impossible not to have sympathy for these women or be touched by their terror that the normal rules of law appear, to them, to have been completely suspended in their case. They had fallen through the cracks, they had no idea how long they might be incarcerated.

‘A newly incarcerated branch secretary from Surrey caused an outbreak of near panic when she announced that gunshots had been heard from Ham: there was talk of detainees facing firing squads. This couldn’t be true, surely? This was England? … Phyllis didn’t really believe that her husband had been executed; yet if she could be taken from her home, locked up without trial, without committing any crime, without explanation, perhaps anything was possible after all.’

Oddly enough, when I read this, I remembered Naomi Wolf, arrested after the ‘Occupy’ protest (famously and photogenically in an evening dress). She wrote:

‘For half an hour I was in a faeces or blood-smeared cell, thinking at that moment the only thing that separates civil societies from barbaric states is the rule of law – that finds the prisoner, and holds the arresting officers and courts accountable.’

The two women’s politics could not be further apart. I want to scream that it is obvious that Wolf should not have been locked up, even for half an hour, and obviously Diana Mosley should; yet I can’t help seeing the connection between that image and Connolly’s description of the imprisoned Diana Mosley, drifting about Holloway Prison in her fur coat. The parameters of what is condoned in a society can shift: fast. You need to be able to depend on the rule of law when they do.

Connolly describes Diana Mosley as ‘being such a wraith’, echoing the allusion to the imprisoned aristocrats in A Tale of Two Cities:

‘So strangely clouded were these refinements by the prison manners and gloom, so spectral did they become in the inappropriate squalor and misery through which they were seen, that Charles Darnay seemed to stand in a company of the dead. … The ghost of beauty, … the ghost of pride, the ghost of frivolity, the ghost of wit … eyes that were changed by the death they had died in coming there.’

It is surely worth emphasising that Diana Mosley’s eyes were never changed, either by prison or by the facts of the Holocaust. In an interview with Juliet Nicholson in 2000, she said of Jewish people, “maybe instead they could have gone somewhere like Uganda: very empty and a lovely climate”. ‘They’ went somewhere else alright: crammed into freezing or boiling cattle trucks, that bore them in their millions out of the minds of those who didn’t really care or want to know.

And what about Diana’s fellow inmates: many of whom were women, whose ‘crime’ was to make tea for fascists and type up their membership lists? What other lists of names might they have typed up if their beloved leader had come to power? What might they have done and should they have been imprisoned for what they might have done? This is the great achievement of After the Party, to take as unsympathetic a group of people as British fascist women and make them vividly alive, even sympathetic, while the horrible facts of history still hang over their actions. We are forced to understand and forced to make some kind of judgement.

I confess that the descriptions of the women’s life in exile on the Isle of Man struck a chord with me. My father and aunts grew up there and, while I don’t know it well, I do remember the brightly-painted hotels on Douglas’s Promenade. Here was where many of the enemy aliens were housed (many of them totally innocent of any pro-Nazi sympathies, indeed some had come to England to escape from Nazism) and, members of the British Union were sent there too. My aunts told me that the street had wire down the middle. One day my father, home on leave, was walking down the street and heard a voice calling to him from behind the wire, it was an Italian friend of his who had been interned. I can’t imagine that conversation through the wire, I just can’t. In a world where the tectonic plates of party politics are shifting so dramatically and with such potential for danger, we are lucky that Cressida Connolly can.