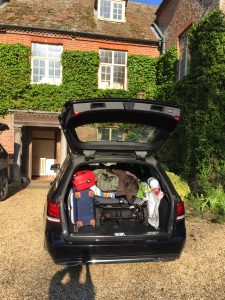 It began, as much chaos does, with the supermarket shop. I am not, I tell husband firmly, spending our precious holiday traipsing round said supermarket shopping for nappies or baked beans or tinned tomatoes, or bread or sugar lumps. We are renting a house for the week in Cornwall and we will take these boring but necessary items with us. The only shopping we will do will be in the local farm shop for meat and cheese and damson gin and similar frivolous, necessary articles and, naturally, fresh fish for this is Cornwall: land of the (decimated) fishing fleet.

You might wish to pause at this point in the blog post to take a bet on how long this abstention from supermarkets lasted.

Done? OK. We were renting the house with another family and emails flew back and forth between me and the other mother: who would bring lemons, olive oil, vinegar and the like? whose children couldn’t/wouldn’t eat what. I wondered if I should I bring a mini stick blender? (Husband vetoed that.) I was motivated by the panic-inducing knowledge that there were ten people to feed, five of them children: two of of whom (both mine) were likely to go off like hand grenades if they didn’t get their meals regular. If I don’t have the wherewithal to prepare a nutritious meal for three children in under twenty (fifteen) minutes I tend to panic, oh and Eldest won’t eat eggs, basis of the quickest meals I know.

In short, two cars set off from Pittleworth, heading for Cornwall, laden down like relief sledges bound for Moscow to victual Napoleon’s army. V and I got the children, while Husband was driving the baggage wagon (jammy sod). The charitable among you will be assuming that we needed the second vehicle on account of the Newfie: we didn’t, it was just six people and associated luggage, particularly the luggage of the three youngest people of the group. I did, briefly, consider taking the Newfie with us, then I remembered the look in the eyes of the other daddy we were holidaying with, the last time he came to Pittleworth and the Newfie drooled on his cream trousers. Clearly it was Other Daddy and his immaculate wardrobe or the fur beast. The irony of this is that the Newfie would also therefore be travelling to Cornwall to the welcoming embrace of the Canine Country Club near Bude. This is quite simply the best kennels for dogs I have ever had the good fortune to come across. How the hell we found a kennels in Cornwall when we live in Hampshire is a long complicated story set in wilds of East Cornwall; it involves a miscarriage, three dogs (one on heat) familial strife, a lot of black fur and a lot of driving frantically down Cornish lanes*. Anyway, the long and short of it is that the Newfie has a home from home that offers a door to door pick-up service. V and I were particularly sensible to the irony that this meant that the Newfie would be chauffeured to Cornwall in air-conditioned comfort while we and the three children would … not be. (We have to keep the windows open because one twin is explosively carsick.)

The night before, we stacked the suitcases in the car and it all looked quite sensible really.

“‘There’s just the fresh food tomorrow,” I assured Husband, “and the last minute things for the children.” Husband kept silent as befits a man who had just wrestled with highchair and travel cot.**

The next morning we began on the fresh food and the last minute things. I staggered round the corner with my largest saucepan, full of chilli. The chill bags were stashed somewhere anywhere. In an excess of bloody-mindedness, I insisted on wedging my kitchen pot of basil on top.

“It still has leaves on it,” I pointed out defiantly.

There there were just the ‘last minute things’ for the children: especially those foul, greying, once-fluffy shapes, known en famille as Grey Bunny, Maw-Maw and Old Lammy. As all parents will understand, we could not possibly spend even a night, let alone a week, without these woolly-looking agents of disease with an indeterminate number of ears, paws and noses between them (to say nothing of Old Lammy’s rather spectacular moustache).

There were the nappies, the wet wipes, the board books, the snacks, the three changes of clothes per child, the CDs for the journey, the cups, the water, the Calpol, the sunblock, what have I forgotten? (Oh yes, the hairbrush because I am an optimist).

Eldest, increasingly excited, wanted to sit in car, and play with the sticker books bought especially for the journey. I suggest that she run around as much as possible. “You’re going to be sitting in the car for a long time, Darling,” I say brightly.

Finally all children have nappies changed, socks and shoes on (no medals, please), have been located and removed from the flowerbed, half way down the drive (damn, that child can move), and the side gate to which one is now clinging. Their protesting forms are strapped into car seats. V and I set off to the merry soundtrack of the Jiggy Wrigglers CD, Husband waves cheerfully; he’s going to do the final check, set the alarm and lock up, ahhh.

The stickers hold out until Salisbury (we don’t fancy our chances at Stonehenge). My tolerance for the Jiggy Wrigglers CD lasts until we rejoin the A303. In tones of maniacal brightness I ask Eldest if she would like to listen to a story: maybe Peter Pan or The Secret Garden? Mysteriously, all story CDs that drive me crazy have not made it into the car (a 1am suitcase rummage well worth it, that). Peter Pan kicks off and we head second to the right and straight on til morning until just after the Yeovil roundabout where the carsick child explodes. We are on the dual-carriage way with nowhere to go. Eldest starts to gag. Finally, in a picnic area artistically decorated in dog pooh, we pull in and go into action. I take the child, V takes the seat. My mobile rings. It’s Husband, he’s at Exeter services, where are we? I impart information to him with a half-dressed twin wedged between my legs.

We set off again, the twists and turns of the Blackdown Hills are too much for the twin, who is sick again as we hit the dual carriageway. I put my foot down and then see a hearse looming in front of me, oh great.  I reduce speed to a more respectful mileage, then I realise two things, firstly, there is a police car with a camera up ahead and, secondly, that hearse must have gone past it doing well over 90 mph. Perhaps I am hysterical but I find this wildly funny; I mean, who do you send the speeding ticket too? I hardly notice the rest of the journey to Exeter, I am so busy speculating about this high-speed hearse: a last wish of the deceased perhaps? Anyway it cheered me up.

Husband meets us at Exeter services as V and I go into bat with the wet wipes again. “I got you coffee” he tells us, “but it’s gone cold”.

Eventually we arrive in Cornwall. The house is lovely, the lovely people at Cornish Gems have left a welcome basket and I place my basil plant firmly on the kitchen work surface before warming up the chilli. By the time the children sit down at the table to eat it, it all feels worth it. 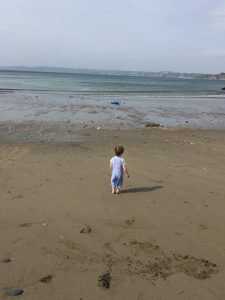 The kind of people who pontificate that ‘it’s not about the destination, it’s about the journey’, do not regularly travel with small children. Frequently, any kind of travel with small children can make you repent the misspent youth that you are clearly being punished for but sometimes you get the kind of holiday that makes the journey worth it and, for our family, this was one of those.

A final thought: I have an American aunt, whose husband was in the military. During the Vietnam war she had to fly to Okinawa on a troop transport with her toddler daughter and no hand luggage. What a terrible war that was.

Oh, and we made it four days before we had to go to the supermarket. 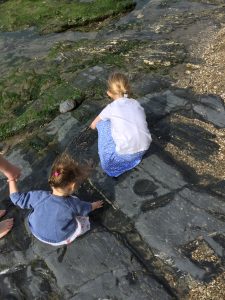 **They provide one of each at the holiday house, but we have twins.