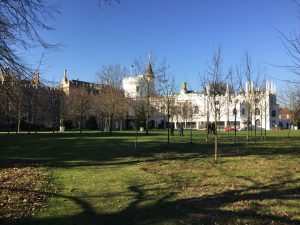 Well it isn’t quite as bad as all that, indeed you could argue that it was entirely a work-related escapade, or at least that it was for research purposes.

In short, I went (accompanied by the ever-patient Husband) to visit Strawberry Hill House: Horace Walpole’s extraordinary eighteenth-century creation that is not only the first gothic revival house but the house in which the first gothic novel, The Castle of Otranto, was written in 1764. For someone who has an enormous and growing enthusiasm for country houses in literature, this pretty much had me coming and going and so, before our next literary lunch in which the theme is the gothic country house, I reckoned I had better have a look and since gothic shares with romanticism an appeal to and a reliance reliance on the senses and the unconscious, immediate impressions struck me as particularly relevant.

In Walpole’s day ‘Chopped Straw Hill’ would have been an inspired site for a house, set in the countryside with the River Thames flowing beneath it. ‘Thank God! the Thames is between me and the Duchess of Queensbury. Dowagers as plenty as flounders inhabit all around’, Walpole wrote in a letter, with his characteristically spiced malice.

However, now, on first approach, #strawbhillhouse Strawberry Hill has a slightly crushed look. It has been hemmed in with housing: the Thames is invisible from the site and the house itself, and its substantial Victorian additions, are now part of the St Mary’s University Campus. The latter has been an extraordinary saving grace — given the fondness of the kind of architects beloved of academe, for excreting piles of concrete in the middle of anything that smacks of hated antiquity — St Mary’s has treated Strawberry Hill with a light hand and it’s playing fields still give some of the sense of rolling countryside that Walpole would have known. Yet still, Strawberry Hill is less a tiny enchanted castle floating on a hill above the Thames, than a battered relic of a bygone imagination. Perhaps this is the way it should be. Strawberry Hill is now old enough to be as old as Walpole always wanted it to be. He was imagining it in ruins before the first coats of paint were even dry and gothic thrives on the idea of decay. There is a story that a gardener of Walpole’s was accosted by a passer by, just after the house was built, and asked how long had it been in the family and was it very old?
“Yes Sir,” replied the gardener, “and his lordship is planning to build an even older bit next year”.

I didn’t quite know what to expect before our visit. I knew about Walpole’s concept of ‘gloomth’ (gloom and warmth) so I rather expected darkness, equal degrees cosy and creepy, and I was very largely wrong.
It had often surprised me to see in photographs that Strawberry Hill was white. The original house was limewashed: surely it should have been made of great grim lumps of granite? or at least rose-mellowed brick? Clearly Insufficiently Gothic. (I felt a bit like the location scouts for Braveheart, who allegedly went to Scotland to find locations and — seeming to have found the castles of Scotland insufficiently Scottish — and went and filmed Irish ones instead.) Why white limewash? Well it was  used in the 18th century but I am also guessing that it adds to the sense of fantasy. The modern visitor to Strawberry Hill can scarcely look at the house without thinking ‘Disney castle’ and that is surely because Disney — that great teller, manipulator and poacher of stories — was also, on paper, the creator of gothic castles that accelerate our imaginative processes: just look at Snow White or Maleficent’s ruined castle in Sleeping Beauty. But the archetypal Disney castle that flashes up before every film*is surely a mashup of two great ‘gothic’ castles: Neuschwanstein and Chenonceau. Both castles are white, as are many of the chateaux that Walpole would have seen on his Grand Tour of Europe as a young man.**

I hadn’t realised how firmly my conception of gothic was rooted in mid-nineteenth-century novels. I walked in expecting lots of red or purple and dark oak panelling: Thornfield Hall on acid (or laudanum). Inside the house there are certainly rooms in red and purple but cream and pale blue? What was that about? The Great Parlour is pale lilac-blue, tasteful as you like, and on one wall of the Blue Breakfast Room is a blue and white floral wallpaper, lovingly recreated from the original, that can only be described as chintzy. I’d never seen or imagined ‘gothic’ and ‘floral’ in the same space before. There is indeed a purple room, the Holbein Chamber, a room dedicated to housing Walpole’s collection of Tudor pictures. The purple is supposed to be regal purple but it is surprisingly pale. I scuttled around annoying the guides, who were both knowledgeable and patient, but no one could tell me whether this was a deliberate use of lighter shades or simply an inability to mix the deeper ones. Imperial purple paint must have been fairly difficult to create.

But of course what the colours do, as you move through the house, is shift the mood of the house radically: from pale, to bright, to dark and from cosy, to oppressive, to dark. And it is, surely, that ability to shift moods radically, which is really the essence of a truly ‘gothic’ house in literature? Gothic fiction needs bursts of terror, a sudden dash of red on the wall.

I went into the hall of Strawberry Hill and my first thoughts were ‘light’ and ‘small’. The galleried hall, three stories high, is covered in a dark cream trompe l’oeil of gothic traceries but, although three stories high, in the other two two dimensions, it is tiny for what it is trying to be: a castle great hall. The proportions are faintly ludicrous and many an architect must have had to go and have a lie-down. Walpole’s Great Parlour And Library are both much more conventional sizes, which leaves me thinking that the disproportionate hall is deliberate: though I could be very wrong.

I immediately thought of Wemmick’s tiny castle in Walworth in Great Expectations. I haven’t yet been able to do any digging to find out what Dickens knew of Strawberry Hill. But both are certainly tongue-in-cheek fantasies of suburban withdrawal, I do wonder.

The effect is to make the whole place feel unreal. The trompe l’oeil and the strange proportions are like a film set, or a Disney cartoon. Was this simply due to the constrictions of budget and space or is this a deliberate assault on our sense of reality? If you look closely at the buildings in a Disney film (especially his gothic ones) you realise that there is nothing like skewed proportions in a building to give a sense of an alternative reality, a fantasy world: which is exactly what Walpole was trying to create. Indeed such strange proportions are central to the strange dream that led him to write his gothic novel The Castle of Otranto (1764) in which, ‘I had thought myself in an ancient castle … and that on the uppermost bannister of a great staircase, I saw a gigantic hand in armour’ and so Walpole went on to create a castle stalled by a gigantic, armoured ghost.

It was in the Holbein room that I got my first clue as to where I was going wrong in my conception of gothic; Tudors? Shouldn’t this be the Plantagenet Room or something suitably medieval? No: because so many of the treasures that Walpole saw in Europe belonged to the later period, Tudor in England, the period of the Houses of Valois and Medici in France and Italy. The Great North Bedchamber has a fireplace with an urn purporting to be the tomb of Mary Queen of Scots and her first husband Francis II, fantasy history: very gothic.

I have rabbited on at some length about the power of stories in this blog but gothic is all about stories, the stories that stir up the imagination to the point to tears or terror. I would suggest that Walpole’s mind — fertile, imaginative, (there’s an understatement) acquisitive — functions as a microcosm of the great sprawling gothic genre that he did so much to revive. Gothic is all about rummaging through history for the good stories attached to people, places and objects and assembling them to create an alternative fantasy world in which the emotions can be explored to their full extremity. In a nook in the gallery was a heterogeneous collection of paintings: two Tudor gentlemen, a naval battle between sailing ships of indeterminate era and a European lady in ‘oriental’ dress. I wish I could have taken a photo. *** Few things sum up the magpie nature of gothic sources so clearly for me: with orientalist, antiquarianism and romanticism all combined.

Unless it be to look out of the window at Twickenham. To do so is to be confronted by suburban housing, much of it bearing the traces of gothic architecture: a few ‘Tudor’ beams there, a piece of scrollwork there, the odd mini tower. Just as the central pieces of gothic art have gathered unto themselves myriad sources and converted them into something new and strange, so the influence of gothic has spewed out across the centuries in manifold different ways. Not only has Strawberry Hill House survived into the modern world but it has helped shape it and you can see the first examples of that by looking right out of Horace Walpole’s own gothic windows onto the world.

I will just add that there are a couple of spaces left for our literary lunch on the theme of ‘The Gothic Country House’ on March 8th. If you are thinking of coming, I promise not to show my ‘holiday snaps’ and do check out the wonderful Strawberry Hill House app, or better still visit the place. I couldn’t recommend it more highly.

*Not nineteenth-century Neuschwanstein, obviously.
**Guess who was watch Fantasia yesterday? — with the children, of course.
***No photographs in Strawberry Hill House, understandably.