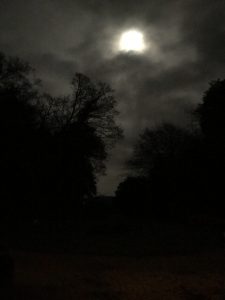 My father used to say that his sister (aged about 10) saw the film of Dracula in 1931 and was never the same again. Bela Lugosi is surely the iconic Dracula: clad in cape and evening dress, intoning the heavily accented, ‘I never drink …. vine’. I was nearly 30 when I sat down to watch Dracula, not without some misgivings: I don’t do horror films.
It was the funniest thing I’d seen for ages.
I liked the rubber bat, which was supposed to hover menacingly outside a heroine’s window: except that it was clearly ‘hovering’ courtesy of a piece of elastic and bounced up and down instead. Boing.
Compare this with some cousins of mine, about the same age, who bounced in after seeing the third instalment of The Lord of the Rings, deeply impressed with the awks: particularly, ‘the one with three skulls on his helmet!’.
Was my aunt particularly weak of nerve? No: actually she was probably one of the most quietly-courageous people I have ever met and gothic fiction had been thrilling and terrifying people for nearly a century and a half before she had her nerves shredded.
Are we all just more sensible, rational and scientific than our poor forebears? You’d be forgiven for thinking so if you watch much costume drama: where those with modern views are intelligent and empathetic (think Poldark) and those who hold to the views of their time are, at best, a bit thick (think Downton Abbey’s Lord Grantham). I think that this is rubbish, to put it delicately; we have largely lost the context within which most gothic fiction was written and read and it is testament to the power of the genre that there are still aspects of novels and films that can scare us.
People have been laughing at gothic fiction almost since it’s creation but many did so more knowingly than us. Most student essays on Austen’s Northanger Abbey are likely to contain a variation of the sentence, ‘Northanger Abbey Is A Spoof Of Ann Radcliffe’s Gothic Novel The Mysteries of Udolpho.’ No It Isn’t: it’s a lot more complicated than that. In Northanger Abbey, it comes as no surprise that the sweet and rather credulous heroine, Catherine Morland, likes reading ‘horrid [gothic] novels’ but so does the hero Henry Tilney, a representative of rationalism and humour in the novel, on whose judgement and common sense, Austen encourages us to rely. When he says of The Mysteries of Udolpho :

“The person, be it gentleman or lady, who has not pleasure in a good novel, must be intolerably stupid. I have read all Mrs Radcliffe’s works and most of them with great pleasure. The Mysteries of Udolpho, when I had once begun it, I could not lay down again; — I remember finishing it in two days —- my hair standing on end the whole time.”

Austen wants us to listen to Tilney but how could the excesses of a novel like Udolpho make a rational man’s hair ‘stand on end’?
It’s hard to disentangle what, for us, is a trope of antiquarianism from details that were simply aspects of people’s lived experience: such as the guttering candle that goes out at the wrong moment.
Electric light: has anything done more to lower the general levels of man’s terror than the ability to have not just light but stable, non-flickering light at the touch of a switch? I once heard the story of a journalist who arrived in a war-torn African city and, as he left the airport, every light in the city went out due to a not-infrequent power cut. The words that flashed through his mind were ‘lighten our darkness, we beseech thee, oh Lord’. ‘Light perpetual’: the biblical plea that is one of the most powerful metaphors in world history. For millennia it could only be a dream of heaven. And the flickering, capricious firelight that was man’s nearest approach it for so long, created at least as many problems as it solved. If fire brings light, it also brings shadows, moving shadows which your imagination peoples and it is capricious. Lighting a fire, trimming a candle: these things are not easy. Freud’s great essay ‘The Uncanny’ argues that what we fear is the familiar in an unsettling context and that is exactly what firelight does, isn’t it? We’ve all known the Dickensian dressing gown in A Christmas Carol, ‘hanging up in a suspicious attitude against the wall’ but the difference today (tonight) is that you can flick on the light switch and reassure yourself when objects look strange in the dark and when most of the great classics where written, you couldn’t. 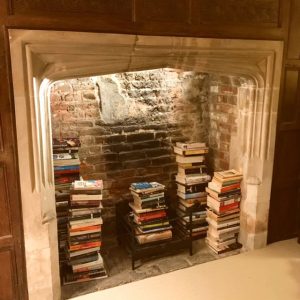 And light changes a room. My husband and I have just moved into our new bedroom downstairs. It is almost impeccably gothic, with a great stone fireplace, dark oak panelling and now Husband’s beautiful fourposter bed (note to daughters: you find a man who can build a fourposter bed at seventeen, that man is a keeper) and yes it is in the oldest (15th century) part of the house. I was lying on the bed on a Sunday afternoon thinking how cosy it all felt, when the lights went out — local power outage —. Nothing gothic in that but I was amazed how gloomy, almost threatening, the room suddenly felt and I doubt that half a dozen candles and a fire would have made it into a place I wanted to linger in on a January afternoon. A century ago (which would be just before electricity was put into the house) I suspect that time in that room would always have demanded a heightened sense of awareness: a nervy need to keep an eye on the corners I couldn’t quite see into. And did I mention that the door doesn’t catch properly and is in the habit of giving a gentle click and swinging open quietly at odd moments? I don’t care: I can always switch on the light and I know who is in the house and the burglar alarm is on but I doubt I’d have felt the same in 1910. I’m sure my ‘nerves’ would have been dreadful: oh, and I’d have been wearing a corset, unable to take deep calming breaths. 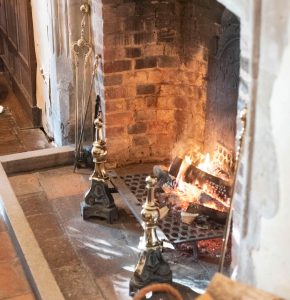 So I know the heroine of The Mysteries of Udolpho, Emily St Aubert, is famous for fainting every few pages but I think we should cut Anne Radcliffe some slack on this point. In the 18th century, people must have needed to be twice as rational to achieve half the levels of calm that we can take for granted. Cold and dark were literally bedfellows for the novel-reading public. For us, they are the stuff of nightmares: and we feel superior to those superstitious peasants and trembling young ladies?
So back to my aunt on the Isle of Man in 1931. It is still a dark isle, lit by candles and oil lamps. The all island electricity scheme wasn’t launched until 1933. The Isle of Man is lousy with stories: the Moddey Dhoo*, a black hound that haunted Peel Castle, The Phyonderee and the Buggane of St Trinians which kept tearing the roof off the church. In 1931, the same year that the Lugosi version of Dracula came out, a remote Manx farmstead on the island, called Cashen’s Gap, was said to be infested by a poltergeist that manifested as an articulate mongoose called Gef; the case drew national interest. While men were laying cables in the Isle of Man, work ground to a halt in a remote valley which, workmen alleged, was haunted by a horned demon. My grandfather, engineer in charge of the project, went to investigate, at dusk, at the ruined cottage where the sitings had occurred. There was something and it had horns alright: it was a large goat. My grandfather was a brave man who was mentioned in despatches during the First World War but be is still twice the man I think he was if he set out to debunk that tale without an electric torch.
So no wonder my aunt was scared by a Hungarian in a high-collared cloak and a rubber bat. She lived on a remote island in the middle of the Irish Sea surrounded by dark, cold, tuberculosis and, crucially, many people who believed the legends of the Isle of Man; I reckon it was a good place for a child to learn to be brave.
Gothic heroines tend to be brave. Emily St Aubrey may be brimming with nervous sensibility but she is actually courageous and increasingly self-controlled; on hearing, on the other side of a locked door that leads out of her bedroom, something that, ‘seemed like that made by the undrawing of rusty bolts … gently, as if the hand that occasioned it was restrained by a fear of discovery,’ she ‘had yet sufficient command over herself to check the shriek that was escaping from her lips’. I’d have screamed the place down — after switching on the light. I wonder if Aunt M would? I doubt it, she trained in a much harder school of terror than me.
Interestingly, I don’t think my aunt ever really liked Pittleworth. Never mind all the changes and improvements that my mother made, the clever things she did with light paint and softening plants. I think Aunt M always saw through them to what Pittleworth must have been in the 1930s: a bleak, dark, cold house, lying on a lane on which, local legend had it, a ghostly knight rode at dusk. I wonder if my father ever told his sister that he, rather than my mother was the driving force behind the move to Pittleworth because he found our previous house creepy and once saw a ghost there?
The more I think about gothic novels and country houses, the more I see realism rather than what The Routledge Companion to Gothic calls an ‘old -fashioned list of dominant gothic tropes’. Modern academia scours Gothic novels for themes of power and identity and transgression and all these things are there but I think it is worth remembering what a bugger it must be to keep your solitary candle lit on a drafty night in a large house. I think that really discussing the conditions of life in those houses might tell us that more of gothic ‘fantasy’ was ‘realism’ (or at least a realistic approach to fear) than we might otherwise think. That, at least, will be the starting point of the next literary lunch at Pittleworth on March 8th, which focuses on the country house in gothic novels. We won’t read by candlelight (not at lunch time) but we will have a fortifying glass or two of something (for the nerves) and we will stir up the fire because, you never know, the electricity might go off again. 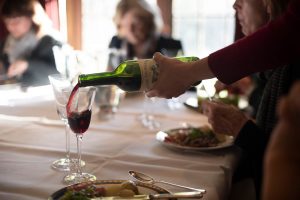 *I just checked the spelling of this. Again.