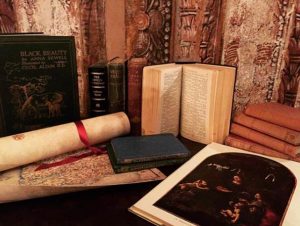 Anyone who reads ( and, I suspect, quite a few who don’t habitually read) has The List at the back of their mind, I say the back because the more confirmed the bibliophile the more subconscious the list will become. These are the novels that changed the way you thought; you don’t think about them that often because they are part of the structure of how you think. These are the ones where the characters became your friends. If you study literature in any depth, these are the novels you hoped that you would study and then winced when you did, because it turns out that dissecting a novel that you really love at eighteen, is a bit like having someone pull the stuffing out of your teddy bear to find out what it is made of. (The feeling goes and something richer than your original empathy comes in its place but the pain of that first dissection, Jane Eyre in my case, stays.)

Us bibliophiles probably don’t talk about The List that often. It’s not the same as that changeful and overcrowded list, My Favourite Books: a list that changes with age, mood and audience. It’s not necessarily that impressive. Let’s face it, how many of us have blithely lied about our favourite reads, knowing our interrogators expect an impressive answer, and claimed to be reading Daniel Deronda, which is actually sliding further and further under the bed, while a dog-eared Terry Pratchett sits smugly within easy reach?

Like the people you fell in love with, there is little rhyme, reason or appropriateness to The List, some made your English teacher proud, some made your parents cross, some will be with you for life, reread once a year almost automatically, some you may not even like, but they itch away in the back of your skull and some you know you will never read again but their work here is done. They changed you. It’s a random collection, The List, and, of course, it’s never quite complete. Here’s mine so far, in roughly chronological order: would you like to share yours?

Gone With the Wind, Margaret Mitchell

The Lion, The Witch  and the Wardrobe, C. S. Lewis

A Traveller in Time, Alison Uttley

The Once and Future King, T. H. White

The Pursuit of Love, Nancy Mitford

Harry Potter and the Goblet of Fire, J. K. Rowling

A Portrait of a Lady, Henry James