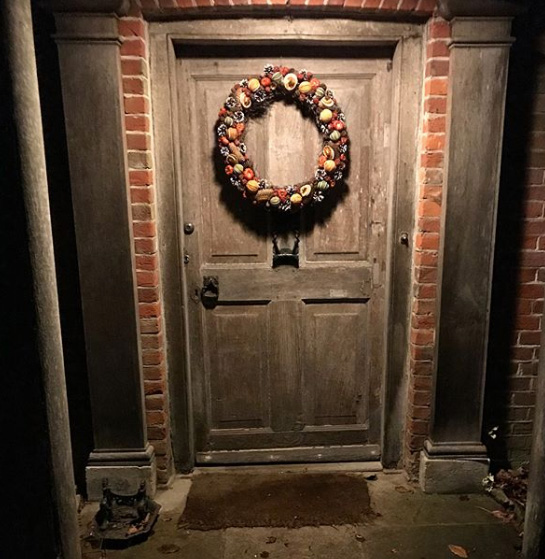 So, here it is: the new website; those of you who saw the old one will realise at least one fundamental reason why I changed it. I think we can all agree that my previous effort had the technological flare of a wedged gerbil’s wheel and a distressing tendency to cut photographs off at the head. Otherwise it was fine.

So this website is partly my effort to wobble, cautiously, a little further into the 21st century. I ‘took a break’ from blogging over the summer, partly because it was clear to me that I would be focusing on the renovation of Pittleworth as  my husband, children and I (to say nothing of the dog) move into the main body of the house. Over the summer, there were moments when I feared that this house might cost me my sanity; I felt that we were living in an unholy combination of a rubbish dump, a mausoleum and a building site. I couldn’t make blog posts interesting or funny, it was too raw (and with the chimney trying to come down, the pipes coming up and no proper cooker, I barely had time). I decided to put blogging on hold and come back to it when, I hope, I felt there was a story to tell about the renovation and life here that wouldn’t include too much moaning. Bluntly, living here makes me insanely lucky and for a few months this year, I didn’t feel so lucky. I do now, I want to share it.

I have been overwhelmed by the interest that so many of you showed in Pittleworth, both on Instagram and on my blog. I had worried at first that people might laugh (in the wrong way) at the bits of the house that were shabby: the peeling paint on the windows and the sun-spotted carpets. I hope that on this website, I can repay some of that interest with more exploration of the house’s history and some of its more interesting quirks.

Obviously this website is more than a blog, it is also to share a new venture: Literary Lunches. Literary Lunches arose out of the things that I want to do with my precious spare time (things that felt like something of a mirage in the last year or so). I want to read, I want to discuss what I read, I like good food and, yes, I like to feel a little spoiled and I like to take time to appreciate this house. I reckon I am not alone.

I also know that, as we get older, the time for long blissful sessions curled up on the bed (my reading nest of choice) with a book, is increasingly curtailed. So I’ve always felt that, if I was going to get involved in any courses or reading groups, I didn’t want Reading Lists. Reading time, for me, is too precious to be faced with ten books: three marvellous, five fine and two awful.

When I taught for a term as a postgraduate on the wonderful ‘Victorian Bestsellers’ course at the University of Southampton, I remember thinking that the poacher had truly turned gamekeeper. I remembered seminars as undergraduate and (less frequently!) graduate when I simply hadn’t done my homework. I was very busy, you understand. Perhaps you know the drill in such classes? It’s mad bull stuff: keep your head down, avoid eye-contact with the tutor, no moves to draw attention — and leave with a vague sadness that actually that sounded quite interesting, if only you’d read it …

I was determined not to let the un-briefed (shall we say), slip through my net as a teacher. I learned how to structure seminars so that discussion and ideas could arise from the material we looked at in class and, frankly, it worked.

And why, I wondered a few months ago, shouldn’t it work among people who were motivated to spend a few hours one day, discussing literature but who hadn’t got numberless hours in a week to devote to books that someone else had chosen for them? I want to create an atmosphere that that is interesting: stretching but also fun and cosy. I hated school first-time round and have no interest in recreating it (though I suppose I could always boil up some mince for eight hours — the dog will be thrilled — and stick some chewing gum under the table if anyone really insists).

My loathing of school also informed my approach to our first day. I asked a friend what we should do for lunch, she suggested quiche. Leaving aside the fact that I have a violent and bigoted loathing of quiche, we take good food seriously at Pittleworth (and don’t worry. Behind the scenes is the unflappable T: I will not be attempting to discuss Jane Austen from a cloud of steam whilst draining new potatoes). I hope we can keep the food seasonal and local, where possible, and interesting. The River Test being practically within hopping distance, we can rely on a plentiful supply of smoked trout for a start but if we rely too much on the garden, there might be a hard sell on rosemary at present! We shall (I hope) see. Anyway, for the first lunch we had slow-toasted lamb with mint and pomegranate (yes, I know pomegranate isn’t local but it is gorgeous and a nod to our murals) and apple crumble, amongst other things, and there wasn’t a lot left: my Eldest had words and the twins and the Newfie looked at me.

Pittleworth’s first literary lunch was so much more fun than I had dared hope. Not all of my volunteers knew each other but there was a terrific atmosphere, lots of animated discussion and lots of laughter. Time flew (cliché, I know). There was some talk of doing it again some time …

So why did I call this venture A Manor of Readings? What did I mean by it?

I wanted the name to evoke a house full of four generations-worth of books. I want it to suggest a house which we can all fill with ideas about the houses in books and the books in houses. I wanted it to suggest a place where we could read from novels while giving ourselves a tiny taste of the way things used to be done In houses like this (enough to make us feel nostalgic: not enough to worry about which knife to eat fish with and which fork to give it a hysterectomy with). Nostalgia is often fun but I also want to see what ideas discussing country houses in a country house atmosphere throws up. You never know, amongst all this literary and historical tradition, we might find something new …

And, in the words of Noel Coward: